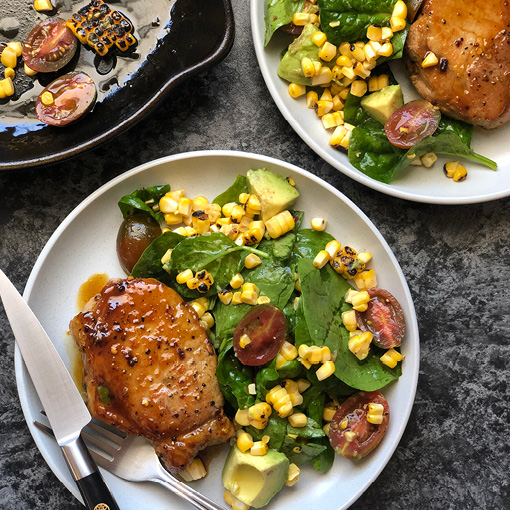 Season the pork with salt, pepper and chilli flakes, then drizzle with olive oil.

Cook the pork in a hot pan until golden on both sides, then add the juice of an orange, honey and water, cover with a lid and simmer gently for 6 minutes until the pork is almost fully cooked through (the time will depend on the thickness of your pork steaks).

Turn up the heat to high, remove the lid and allow the liquid to bubble and reduce until it becomes a sticky glaze and coats the pork. Remove from the heat and set aside to rest while you make the salad.

Char the corn on the cob over an open flame (if you have a gas stove), or place the corn in a hot dry pan and allow to char on all sides. Once charred, slice the kernels off the cob and place into a bowl.

Season with salt and pepper, add olive oil and lemon, then toss the corn well to dress. To the bowl, add the spinach, tomatoes and avocado, then toss gently to dress all the salad ingredients.

Serve the pork steaks drizzled with any extra glaze alongside the salad.