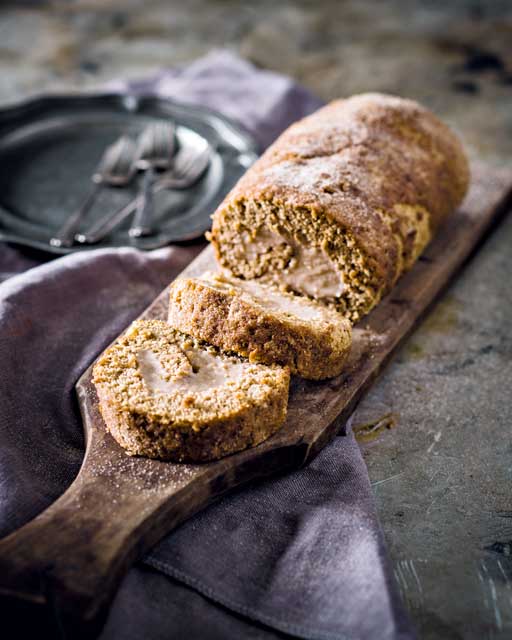 For the cinnamon sponge:

Whisk the eggs and sugar until the mixture is pale, light and frothy.

Sift the flour and cinnamon into the bowl and fold together.

Pour the mixture into the lined tin and spread evenly out into the corners.

Bake in the preheated oven for 10 – 12 minutes, or until well risen and firm to the touch and the sides are shrinking away from the edge of the tin.

Place a piece of baking paper bigger than the Swiss roll tin on the work surface. Sprinkle with the cinnamon sugar.

Carefully invert the cake onto the paper and remove the bottom lining piece of paper.

Cut a score mark 2.5cm along one of the shorter edges. Starting with this edge, begin to tightly roll up the sponge using the paper. Roll with the paper inside and sit the roll on top of its outside edge to cool completely.

While it cools, make the filling.

Place milk and cinnamon stick into a pot and bring to the boil.

In a bowl, whisk together the egg, sugar, flour, corn flour and vanilla.

Pour the boiling milk into the egg mixture, while continuously whisking.

Discard the cinnamon stick then return mixture to the pot and cook on medium heat until thickened.

Pour into a bowl, cover with cling film (making sure it touches the custard) and leave to cool completely.

Unroll the cooled sponge, and then spread with the cold milk tart filling.

Roll up again then cut off the edges to neaten it up.