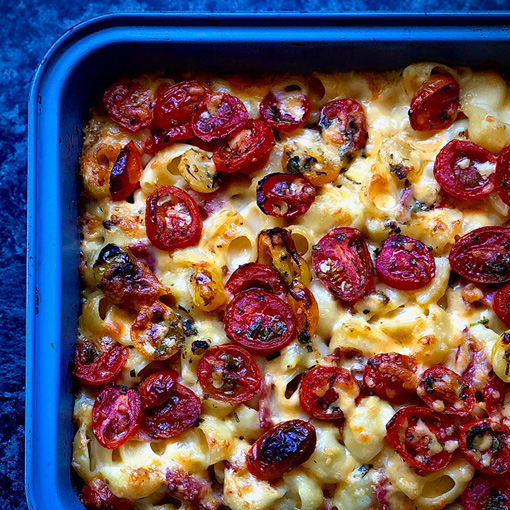 Put bacon on a tray, in one layer, then cook in the oven for 15 minutes or until cooked through. Allow to cool, then chop into bite-sized pieces.

Melt butter in a saucepan, then whisk in the flour and allow to cook for a minute. Whisk in the milk, then keep stirring until thickened and bubbling. Simmer for 5 minutes.

Stir in 3/4 of the grated cheese, and season to taste.

Cook pasta in boiling, salted water for 6 minutes, then drain – don’t overcook the pasta at this stage as it will cook again in the oven.

Stir the pasta into the sauce along with the chopped bacon. Then transfer to an oven dish. Sprinkle on the remaining cheese.

In a bowl, mix together the sliced tomatoes, chopped basil, salt and pepper, then scatter over the pasta.

Bake in the 200c oven for 20:30 minutes until bubbling and cheese is melted and browned.